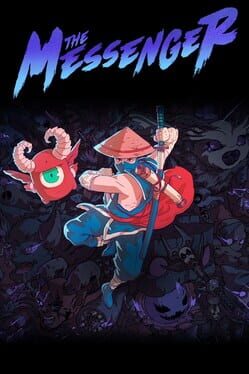 During the attack of his town by an evil presence armed force, a youthful ninja leaves on an undertaking alone. He battles through a reviled world to convey a look over that is fundamental to the endurance of his group. What begins as a great activity platformer rapidly develops into a rambling time travel experience loaded with fervor, astonishments and diversion; dynamic, aerobatic ongoing interaction and very spotless controls deserving of an epic ninja experience. Character updates, new abilities, Hidden levels and stretched arrangements. Carefully executed 8-piece and 16-piece illustrations, movements and foundations channel the extraordinary works of art of the class. A vital assemblage of surprising scoundrels, supervisors and partners. Unique soundtrack by the notable chiptune writer Rainbowdragoneyes , high quality with Famitracker.

The Messenger is released by Devolver Digital in 30 Aug 2018. The game is designed by Sabotage. The Messenger is a typical representative of the Indie genre. Playing The Messenger is a pleasure. It does not matter whether it is the first or a millionth hour in Indie, there will always be room for something new and interesting. Thrilling levels and gameplay The Messenger will not leave anyone indifferent. The complexity of gameplay increases with each new level and does not let any player get bored.

In addition to The Messenger, the representatives of Indie games also belong:

The Messenger is versatile and does not stand still, but it is never too late to start playing. The game, like many Indie games has a full immersion in gaming. AllGame staff continues to play it.

The Messenger is perfect for playing alone or with friends.

At AllGame you can find reviews on The Messenger, gameplay videos, screenshots of the game and other Indie representatives.

Author: Diego "Syd" Cinelli
Date: 2020-07-30 23:00:24
Is there life beyond nostalgia? With this question in mind I ventured into the desolate wastes of The Messenger, armed with a highly decorated (read: old) controller and the trusty computer. With its 8-bit look, the action platformer style and the whole catalog of quotes, references and giveaways already intuitive from the first glance, the debut video game of the Canadian team Sabotage Studio enjoys playing with the player&#39;s expectations, presenting a title valid and intelligent disguised as a cliche.

Those who know the Ninja Gaiden series and perhaps have had the good fortune to play the progenitor on NES (or even in the games room) will find several fragments, hidden in plain sight, in The Messenger: starting from the appearance of the protagonist, up to the sound effects, there are many elements that bring the player back years and years - it is no coincidence that time is one of the fundamental themes of the game, after all. As far as I'm concerned, I felt like when, as a child, I played things like Shadow of the Beast; this is because The Messenger does not just put Ninja Gaiden on the plate, but aims to recall the typical elements of its kind - although a plural would be needed here, but let's go step by step ...

From a narrative point of view, the game presents one of the most classic initial situations: a village where the last survivors of the human race train as ninja to face an army of demons that, according to an ancient prophecy, will arrive to finish the extermination begun in the past. When finally (so to speak) the evil creatures present themselves, the protagonist is commissioned by a mysterious warrior to carry a sacred parchment on top of the highest mountain on the island. With the cry of "Godspeed, Messenger!" the adventure begins.

However, it takes just a few minutes to understand that one of The Messenger's strengths is the ability to play with stereotypes. The game is chock full of funny, self-deprecating jokes, with easter eggs scattered far and wide (and a hint of autobiographical element). I didn't expect to find myself in front of an action platformer capable of making me laugh out loud: it was a really pleasant surprise.

The soundtrack, composed by Eric W. Brown, deserves special mention. The catchy melodies fit perfectly with the rooms, as well as playing in an interesting way with one of the main mechanics: the time jump. It is no mystery that in The Messenger it is possible, at a certain point in the game, to let the protagonist pass from the present to the future; the interesting finding lies in the fact that the whole audio-video department moves accordingly, changing from 8 to 16 bits. The more detailed graphics and the music remixes effectively transport the player in two different moments in time.

This mechanic is appreciable not only aesthetically, but also and above all from a level design point of view. As in the case of the old and glorious Castlevania: Simphony of the Night, with its inverse castle (who remembers it, please tell the new generations in front of the fireplace), the possibility of facing the same rooms of each level in two different versions, in this case 8 bits of the past and 16 of the future - having, in many cases, to use more steps in time to solve simple puzzles - involves meticulous work in the design phase, in which the developers must simultaneously consider both game reality. The result is, in this sense, excellent: I have never found myself in front of situations in which this mechanic created problems but, on the contrary, has always been stimulating.

The game system of The Messenger is essential but well thought out, especially from the point of view of the controls. It is not possible to assign a function to all the buttons on the controller: the buttons to be used are few, but multifunctional. The developers did a great job of excluding intricate keystrokes while still leaving room for complex maneuvers. There is an undeniable fascination in ascertaining the acquired mastery of the (few) game mechanics present in terms of movement: in the more advanced levels we come to concatenate together series of different commands in rapid succession, but without ever having to go crazy between swarms of commands almost never used previously.

The platform side of The Messenger is undoubtedly its strong point. The level of difficulty increases very gradually, without ever reaching too high peaks. Personally I found this aspect of the game very satisfying, especially in the last levels - when fast, precise movements and an excellent command of some of the mechanics are required - but the most avid fans of the genre looking for a very difficult challenge (mindful of the original Ninja Gaiden) they may be disappointed: the game is thought to be able to be ended even by "casual" players and there is no voice in the settings that allows you to adjust the difficulty.

The Messenger's approach to movement is, so to speak, "active". To understand what I mean, just take a look at the protagonist's first ability, in his possession right away: Cloudstepping. Basically it is the classic double jump, but it can be performed only if you hit something with the sword in the air. The input is jump-attack-jump and often implies the need to meet enemies (or even bullets) in order to exploit them as trampolines. Cloudstepping is an excellent mechanic because it leads the player towards an active attitude, keeping the game pace high.

The character's advancement system is less brilliant, which has a rather poor assortment and does not force the player to make choices - during a game you can safely unlock all the available upgrades. The penalties for deaths are therefore practically absent; in fact, in The Messenger, every time you fall on deaf ears or all the notches of the life bar are exhausted, you are "saved" by a small demon who automatically takes us back to the last checkpoint visited. In return, the cute little creature will accompany us for a stretch of road, "stealing" the Time Shards (the currency of the game) that we will collect. Since there is no particular lack of fragments or a wide choice in terms of purchasing possibilities, this penalty is completely negligible.

Another slightly subdued aspect in The Messenger is the action part. There is very little variety in terms of opponents, with most creatures reoccurring on each level (both in the present and in the future) and only a couple of different creatures depending on the environment in which you are. The boss fights are well done, but the difficulty of the fights does not increase on a regular basis and some opponents found in the middle of the path are much more difficult than the last in order of appearance.

As already known from the statements of Sabotage Studio and the distributor Devolver Digital, about halfway through the game takes on characters from metroidvania, giving way to access new areas of the areas already explored (mainly taking advantage of the aforementioned time jump mechanics). If on the one hand it is interesting to be able to discover rooms that were previously unreachable, on the other hand the tension accumulated by the video game in its initial part is lost: if immediately everything seems to move in one direction, the apparent freedom of this second section partially affects the excellent work done previously. In addition, the rooms where the only extras in the game are located (green coins to collect to receive a mysterious prize), initially hidden, become (for a variety of reasons that I am not listing to avoid spoilers) all too easy to find, once you reach the advanced stage of the game. This affects the longevity of the game, which is quite limited - considering also the low replay value; however, the price at which The Messenger enters the market is absolutely adequate for the product and I seriously doubt that you will regret the purchase.

MODUS OPERANDI
I played The Messenger thanks to a code provided by the distributor, in the version for Steam, on a PC with a 3.20 GHz i5 processor, 16 GB of RAM and a 3 GB nVidia 1060 video card, armed with the old Xbox 360 controller. I completed the game in just under 12 hours, unlocking 35 out of 40 trophies without going hunting for collectibles.

Screenshots will help you evaluate the graphics and gameplay of The Messenger. 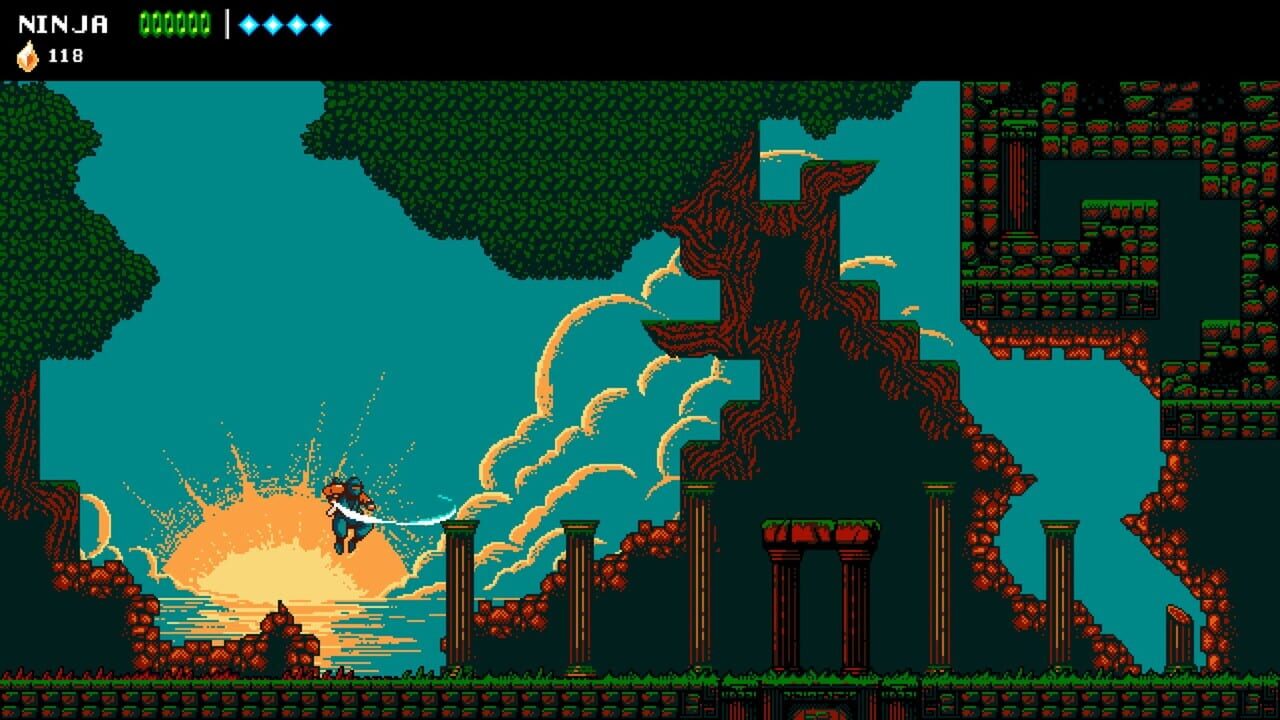 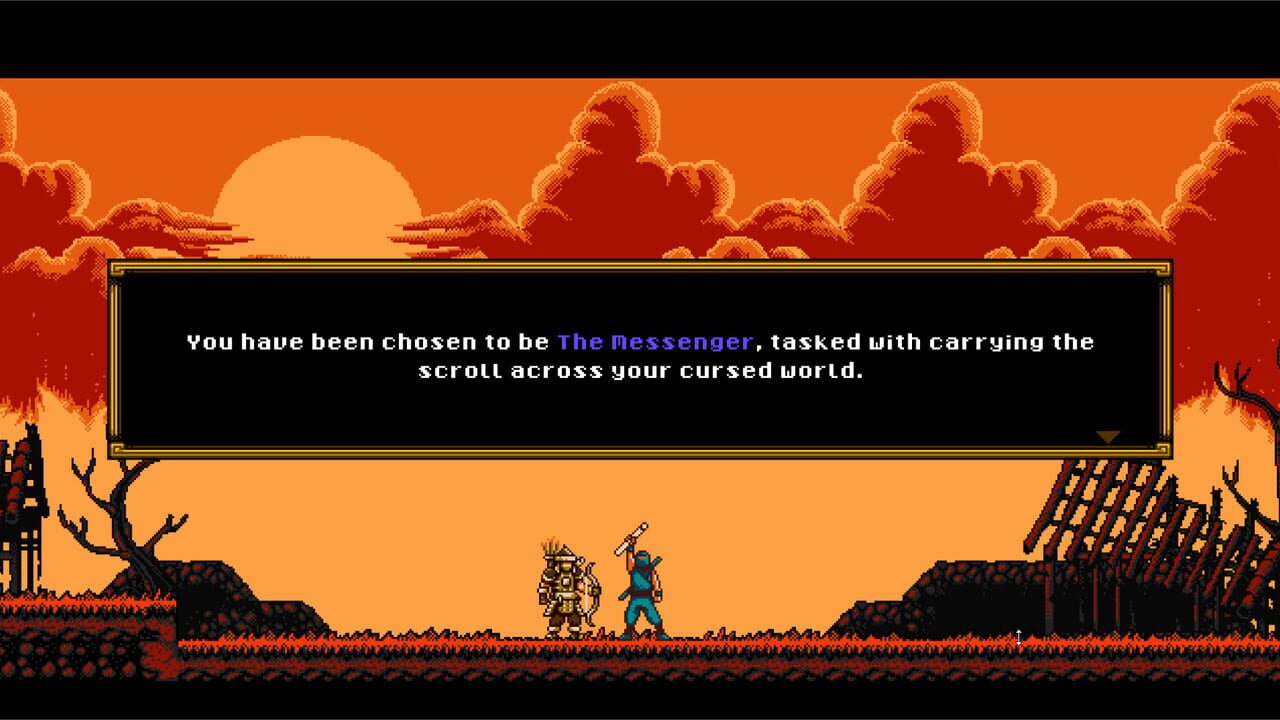 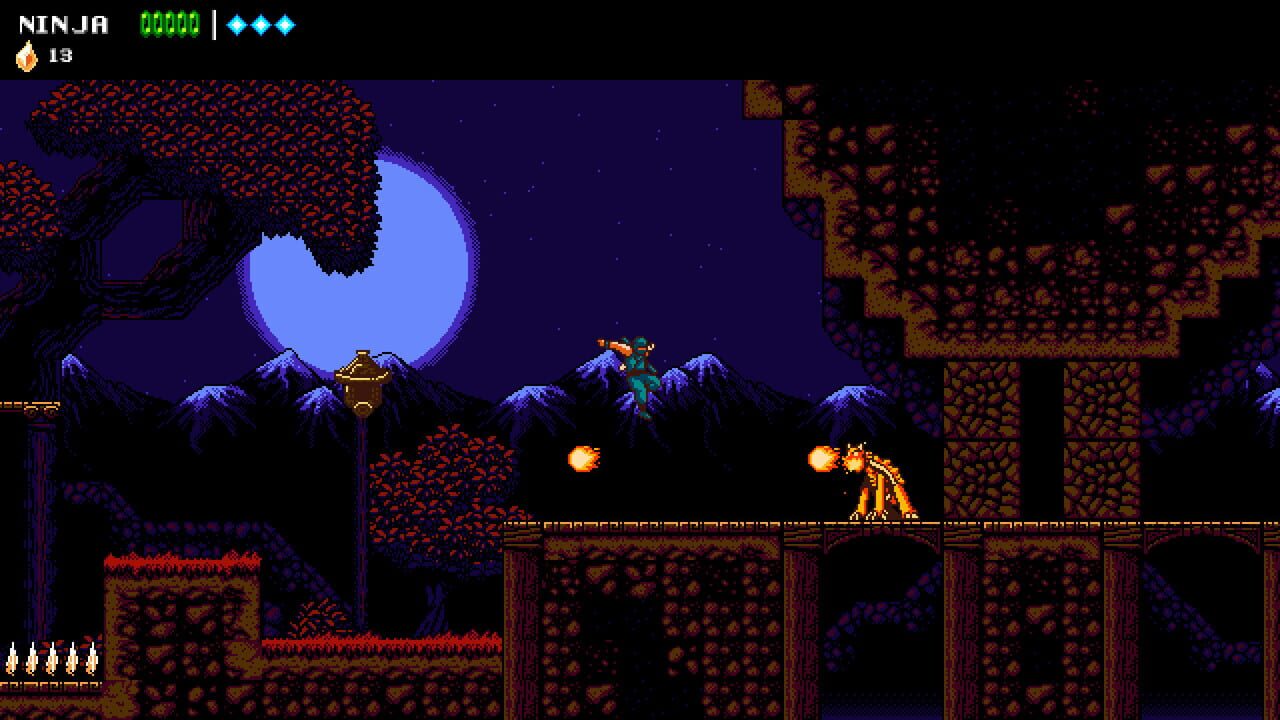 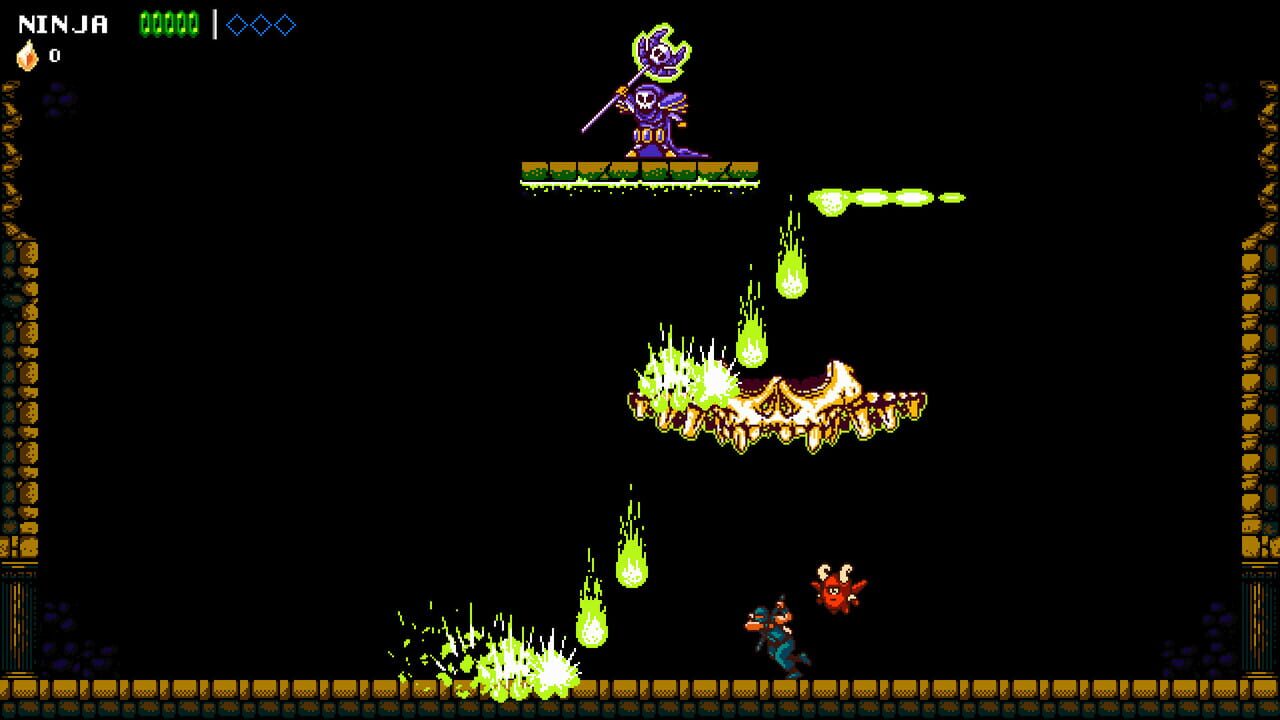 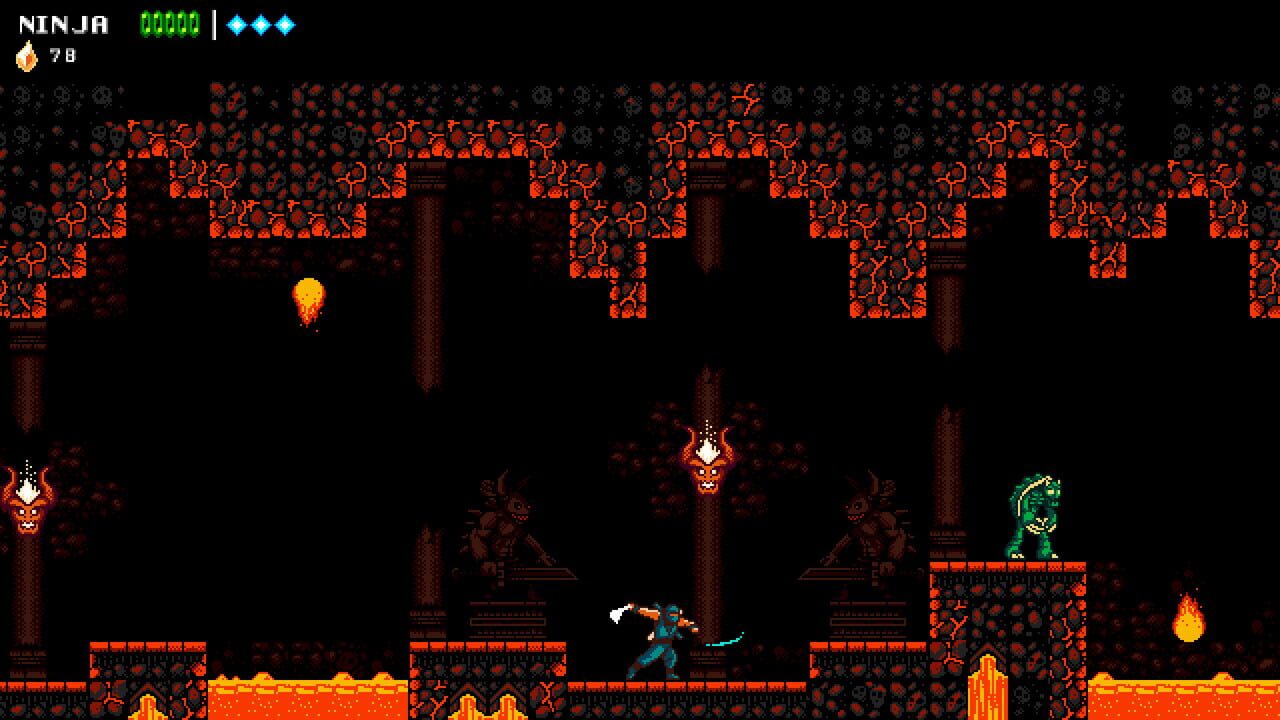 But that's not all! We also carefully prepared the best strips from The Messenger.

If you like The Messenger, but you're tired of it and want something new, you can try other games.