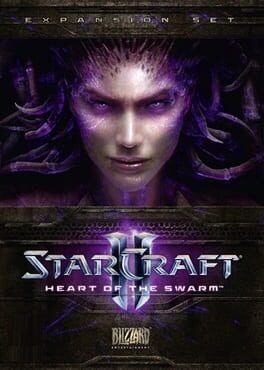 StarCraft II: Heart of the Swarm

You are Sarah Kerrigan, former Queen of Blades. Once the most feared entity in the galaxy, you now wait in a cell in the depths of a high-security research laboratory. Before the murderous forces of the Terran Dominion close in, you must plot your escape to the dark reaches of space… and reclaim your living empire at the Heart of the Swarm.

About StarCraft II: Heart of the Swarm

In addition to StarCraft II: Heart of the Swarm, the representatives of Real Time Strategy (RTS) games also belong:

A complete list of games like StarCraft II: Heart of the Swarm can be found at AllGame here.

StarCraft II: Heart of the Swarm is versatile and does not stand still, but it is never too late to start playing. The game, like many Real Time Strategy (RTS) games has a full immersion in gaming. AllGame staff continues to play it.

StarCraft II: Heart of the Swarm is perfect for playing alone or with friends.

At AllGame you can find reviews on StarCraft II: Heart of the Swarm, gameplay videos, screenshots of the game and other Real Time Strategy (RTS) representatives.

This section tells the history of the world of StarCraft II: Heart of the Swarm

Following the events of Wings of Liberty, Terran Dominion forces attack Sarah Kerrigan and her allies in a research facility in the territory of the Umojan Protectorate. Kerrigan and other residents escape to the flagship of Raynor's Raiders, the Hyperion, but Commander Jim Raynor is cut off by the Dominion. The Hyperion escapes, but Kerrigan remains behind to locate Raynor, only to hear a Dominion newscast announcing that he has been captured and executed. Enraged, Kerrigan returns to Zerg territory to retake control of the swarm and overthrow the tyrannical Dominion. On the volcanic planet Char, Kerrigan subdues a renegade brood before attacking the occupying Dominion forces. Kerrigan, in a rage, destroys a Dominion command fortress and kills its commander, General Horace Warfield. After a change of heart, she allows the wounded and the unarmed to evacuate. On the frozen planet Kaldir, she annihilates the local Protoss forces, reclaiming the local brood and evolving the swarm to survive in harsh climate. Zeratul visits Kerrigan and advises her to regain her powers by traveling to Zerus, the original homeworld of the Zerg. On Zerus, Kerrigan learns that a fallen Xel'Naga named Amon was responsible for making the Zerg what they are: A warring swarm, bound to a single overriding will. Some primal Zerg, however, eluded and remained independent constantly evolving creatures. One such zerg named Zurvan, known as the "Ancient One", lies dormant in hibernation and must be awoken by Kerrigan for its knowledge on the origins of the Zerg. Upon awakening, Zurvan advises Kerrigan to seek out a primordial spawning pool to regain her former powers. Kerrigan enters the ancient spawning pool and transforms into a primal Queen of Blades. She kills and absorbs the genetic essences of four powerful hostile primal leaders and Zurvan after it attempts to collect her essence for itself. A primal leader called Dehaka and his pack join her, provided that she gives them essence to collect. Kerrigan is contacted by a Zerg-infested Alexei Stukov, a former Vice Admiral of the United Earth Directorate who was apparently killed by Duran at Braxis. With Stukov's aid, Kerrigan assaults a research station where Emil Narud, a servant of Amon, is breeding Protoss-Zerg hybrids. After eliminating Dominion facility security forces and Tal'Darim loyal to Narud, Kerrigan confronts Narud in a showdown of power. Morphing first into Raynor and then into Kerrigan's human form, Narud impales Kerrigan before being fatally wounded. Revealing that Amon is revived, he perishes. Meanwhile, Emperor Arcturus Mengsk contacts Kerrigan and claims Raynor is kept alive and imprisoned, as a bargaining chip against Kerrigan attacking the Dominion throne world of Korhal IV. Kerrigan relays the news to the Hyperion. They plan to hack the Dominion network to locate Raynor, but the only one with such expertise is Colonel Orlan, held captive by Mira Han, a mercenary who refuses to release him. Thus, the Hyperion attacks Mira's mining operations, forcing her to comply. Orlan locates Raynor on a prison ship that constantly changes location. Kerrigan assaults the ship and rescues Raynor, who is revolted by Kerrigan's reversion of form. Although he cannot bring himself to shoot Kerrigan, he tells her that they are done despite her confession that she loves him. Having united all Zerg under the swarm, Kerrigan launches an invasion of Korhal, concentrating on the capital city of Augustgrad. With the aid of Dehaka and his pack, she destroys Mengsk's Psi Destroyer, a device that hurts the swarm from afar but is ineffective on the primal Zerg. As Kerrigan sends the swarm to assault Mengsk's palace, Crown Prince Valerian urges her to slow down her invasion to minimize civilian losses; she accepts, understanding that Valerian is not like his father. Midway through the final battle, Raynor arrives to assist Kerrigan, much to her surprise. Together, they succeed in breaching the imperial palace. In the confrontation that follows, Mengsk reveals that he has the Xel'Naga artifact in his possession, intending to use it to kill Kerrigan. Before Mengsk can do so Raynor interferes, allowing Kerrigan to impale Mengsk. Kerrigan kills Mengsk by injecting psionic energy causing him to explode. As the dust settles, Kerrigan thanks Raynor before joining her swarm. With her quest for vengeance completed she renounces everything she once was or had and prepares to face Amon, the enemy of all living things, in a conflict that will not only decide the fate of the Koprulu Sector, but the entire Galaxy.

Author: Juanma Castillo
Date: 2020-07-30 21:58:27
Many of us had been waiting for StarCraft II: Heart of the Swarm, the continuation of Blizzard&#39;s successful RTS, Wings of Liberty, for many reasons: the continuation of the single-player campaign after its resolution and the doubts that arose, the development of the multiplayer after spending 5 months with various balance patches and the controversy raised in forums about it. Likewise, the most fans wanted to see if it is possible to regain prominence in the world of eSports, terrain dominated by League of Legends, which breaks tournament and spectator figures.

Follow the same mission mechanics, out of a total of 27 total but real missions, within the storyline of the campaign, 20. The remaining 7 can be called mini-missions of evolution of some units to choose one of two options, and Thus reinforcing our swarm in the face of the strategy or approach that we propose.

The StarCraft 2: HotS quest system is the same, but clearer and more outlined, with its four levels of difficulty clearly showing directly which ones have been completed and the timestamp in which they have been completed. Once again, we have the mission achievements, which are 3, but in many of these missions there are specific achievements, but it is necessary to play at a difficult or brutal level and with certain objectives.

The missions remain the same in terms of the variety of objectives, but it is not that they have thought beyond "reaching a point", "reaching X deaths", "Kerrigan must survive". There are always side missions, which come to be parallel, but it does not delve into it, letting out a magnificent gameplay opportunity to expand its narrative load.

Perhaps one of the first differences that have emerged these days with StarCraft 2: HotS , has been a multitude of opinions on how easy the difficulty levels are despite having a good review in Wings of Liberty , and how many people feel that the Brutal level is not living up to its name. Still, everything will work out over time if people really try for achievement or a desire to excel over what was achieved in the first title dedicated to Terran. Remarkably, the control of Kerrigan is almost total and absolute in the vast majority of missions, and that it has its own section in the "Leviathan Room" called "Kerrigan", where you see how it levels up and you can choose between a set of abilities that directly benefit her as a character, or indirectly, providing benefits to the Swarm.

Once again, we go from planet to planet completing missions and unlocking new units that we will add to our Swarm, but with the added complexity that we can choose only one strain from the two available. The game allows us to test them before in a mini mission as we have discussed above. With this, each Zerg creature offers three unique variants, on which there is a choice, with which we are once again faced with a tactical decision and that offers a large number of playable possibilities according to the chosen abilities, mutations or strains.

Read on for our review of StarCraft II: Heart of the Swarm for PC

We gathered the finest game reviews for you to have a better idea of the StarCraft II: Heart of the Swarm

Screenshots will help you evaluate the graphics and gameplay of StarCraft II: Heart of the Swarm. 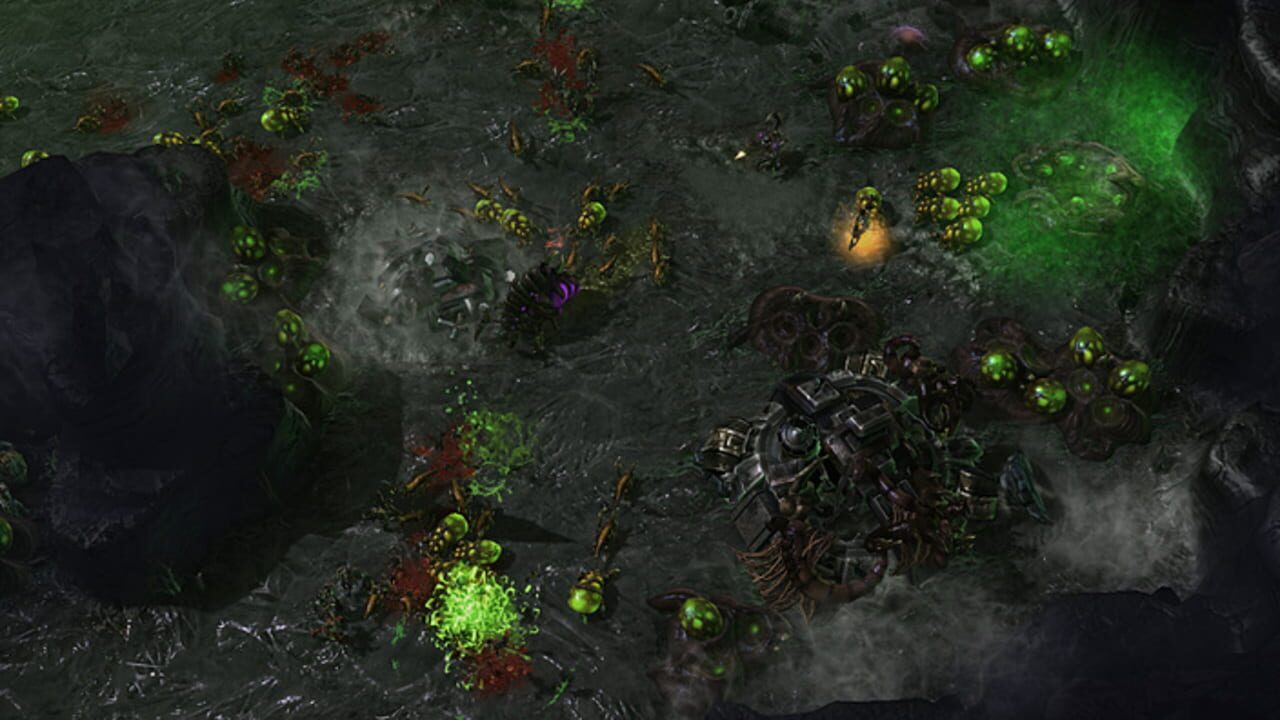 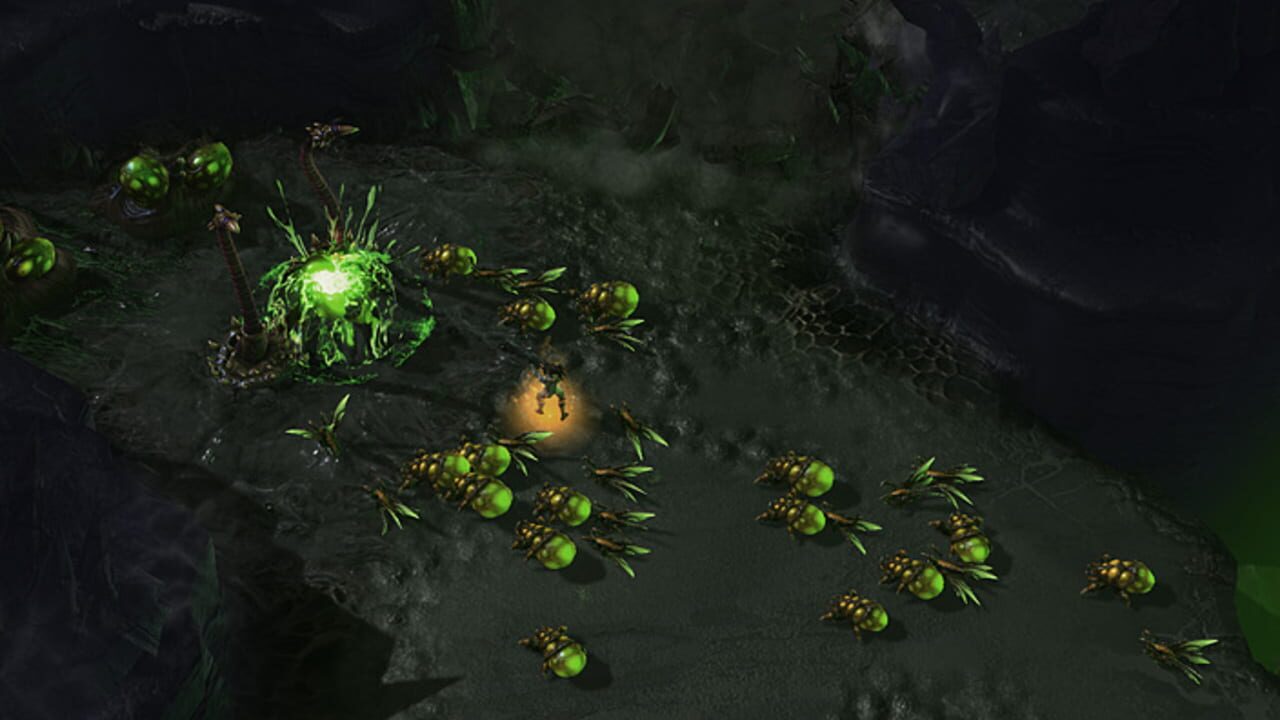 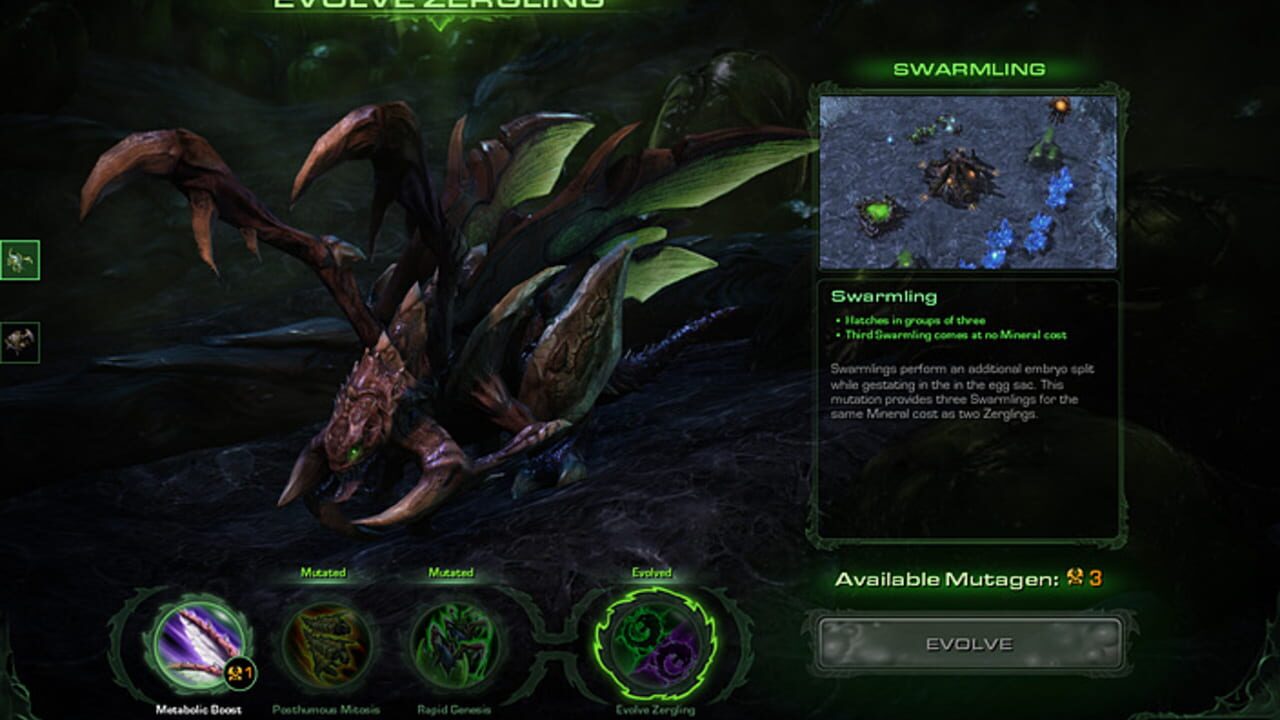 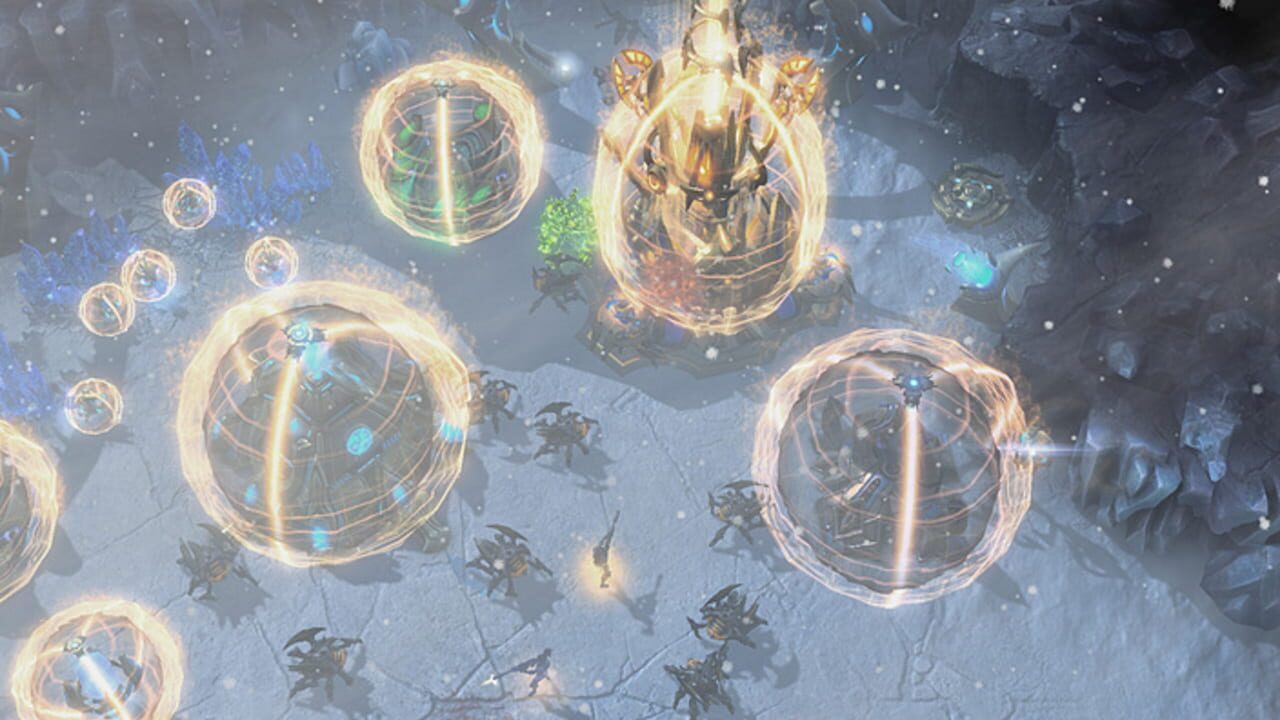 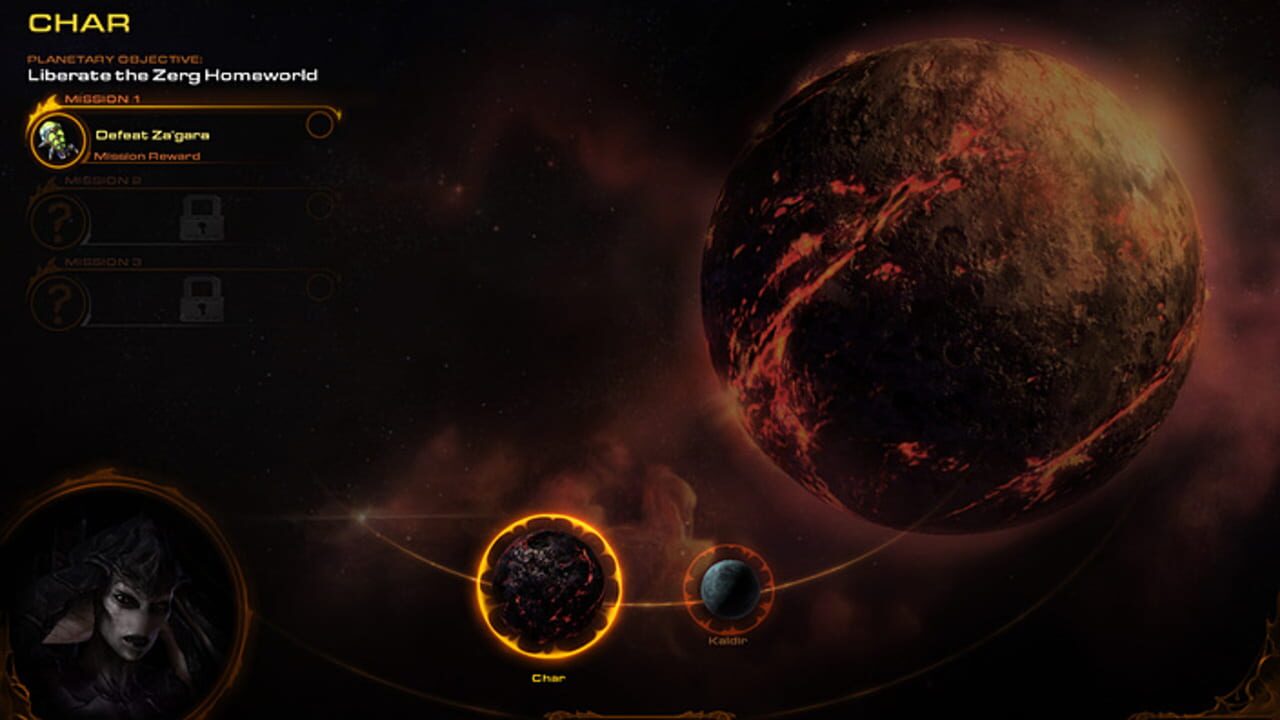 But that's not all! We also carefully prepared the best strips from StarCraft II: Heart of the Swarm.

If you like StarCraft II: Heart of the Swarm, but you're tired of it and want something new, you can try other games.