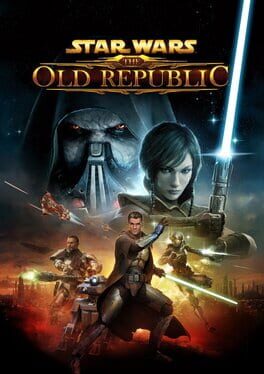 Step in to the center of your own Star Wars™ story as you choose your path down the light or dark side of the Force™. Your choices have impact not only on your story but on those who join you along the way. Each choice you make can change how your story unfolders including unexpected story twists or devastating consequences that impact you and your Companions. Play as one of 8 legendary Star Wars classes include Jedi, Sith, Smuggler, Trooper and more – this is your story and you decide how you want to build your reputation and influence across the galaxy as you join in epic adventures and challenging missions on the ground and in space! Play free through 50 levels of story or choose to join as a Premium player to maximize your options and play your way! As a Premium player you receive access to all prior expansions including Rise of the Hutt Cartel (Level 50 – 55), Shadow of Revan (Level 55 – 60) and the most recent expansion, Knights of the Fallen Empire (Level 60 – 65). Plus, receive special options including access to the full spectrum of character species; early access to new expansions and –that’s not all – as a Premium player you receive a monthly reward of 500 Cartel Coins to spend at the in-game Cartel Market for boosts, gear, collectibles and more. As you start your adventure, you will become the Outlander, a veteran of the Great Galactic War in our latest expansion, Knights of the Fallen Empire. Travel to the Outer Rim of the galaxy to face a new threat, Emperor Valkorion and his dark and dangerous son, Prince Arcann. Starting at Level 60 is easy with a new character token that allows you to jump in to the action through an accessible story-driven point of entry optimized for new players. Get ready for unlimited adventure as you lead a band of allies in elite and covert missions to save the galaxy from an evil force that is growing with every death… only you have the strength to stand against him – it’s your destiny! Key Features Face Your Destiny. Choose your path down the light or dark side of the Force™ as you build your legacy. Travel across the galaxy on epic missions, pilot your own Starfighter, battle through fast-paced space combat and build your own custom Stronghold to rest and enjoy the spoils of your battles with friends. Choose from one of eight iconic roles and become the hero of your own personal Star Wars™ saga! Recruit Your Companions. Meet intriguing Companions as you adventure who can join you as allies fighting by your side. Choose friendship, romance or betrayal – but beware as choices have impact and you never know when or where your paths might cross again. Play Your Way. Play alone or join with others in online multiplayer missions and story-driven battles or face your enemies in player-vs-player Warzones. But, when the battle is over meet friends, sell your items and restock your inventory on the Fleet where socializing is a galactic pastime. Finally, refresh and share your story with friends in one of the galaxy’s infamous Cantinas. Pilot your Personal Starship. Join your friends in space combat through Galactic Starfighter as you pilot your own customizable ship! Recharge and let your crew do the work from the comfort of your personal ship that serves as your private base of operations for you and your crew and is the starting point for your ongoing missions. Prepare for a journey that will take you across the galaxy as the hero at the center of your own Star Wars™ story – it’s your destiny!

About Star Wars: The Old Republic

In addition to Star Wars: The Old Republic, the representatives of Role-playing (RPG) games also belong:

A complete list of games like Star Wars: The Old Republic can be found at AllGame here.

Star Wars: The Old Republic is versatile and does not stand still, but it is never too late to start playing. The game, like many Role-playing (RPG) games has a full immersion in gaming. AllGame staff continues to play it.

Star Wars: The Old Republic is perfect for playing alone or with friends.

At AllGame you can find reviews on Star Wars: The Old Republic, gameplay videos, screenshots of the game and other Role-playing (RPG) representatives.

This section tells the history of the world of Star Wars: The Old Republic

Protected by the legendary Jedi Order, the Galactic Republic stood as a bastion of peace in the galaxy for a thousand generations. Several centuries ago, the greatest threat the galaxy has ever known emerged in the form of the dark Sith Empire. After a volatile war, the Republic emerged victorious and the Sith were assumed to be extinct. Nonetheless, the Jedi have maintained a constant vigil over the ancient Sith homeworld, Korriban, to protect the galaxy from the darkness that still resides in the planet's tombs. Though a small group of survivors escaped to warn of the Imperial invasion, it was only a minor reprieve for the Republic. Korriban was one of several worlds to fall in the initial onslaught, and in the years that followed, the Republic suffered many more painful defeats. Emboldened by their numerous victories, the Empire soon moved to conquer the Core Worlds, luring the Republic fleet out of position and launching a surprise attack against the noble world of Alderaan. The courageous stand on Alderaan rallied the spirits of Republic defenders across the galaxy, but the balance of the power remained in the Empire's favor. This only fueled the surprise felt when the Imperial Dark Council extended the offer to the Republic to engage in peace negotiations. Suspecting possible treachery, Republic officials agreed to meet on Alderaan, but insisted that the Jedi Order marshal all its resources to provide comprehensive security. The Jedi complied, sending most senior members of the Order to Alderaan, and leaving only a token force in the Temple on Coruscant... After destroying the Jedi Temple and overwhelming the Republic's defenses, Imperial forces occupied Coruscant, holding the planet hostage while negotiations restarted on Alderaan. With their capital at stake, Republic officials had little choice but to agree to the Empire's terms. The Treaty of Coruscant was signed, forcing the Republic to cede control of several star systems and to acknowledge new boundaries of Imperial dominion. Though the treaty brought about an official end to the war, tensions between the two sides have remained high over the last several years, and now, a return to open war seems all but inevitable...

Screenshots will help you evaluate the graphics and gameplay of Star Wars: The Old Republic. 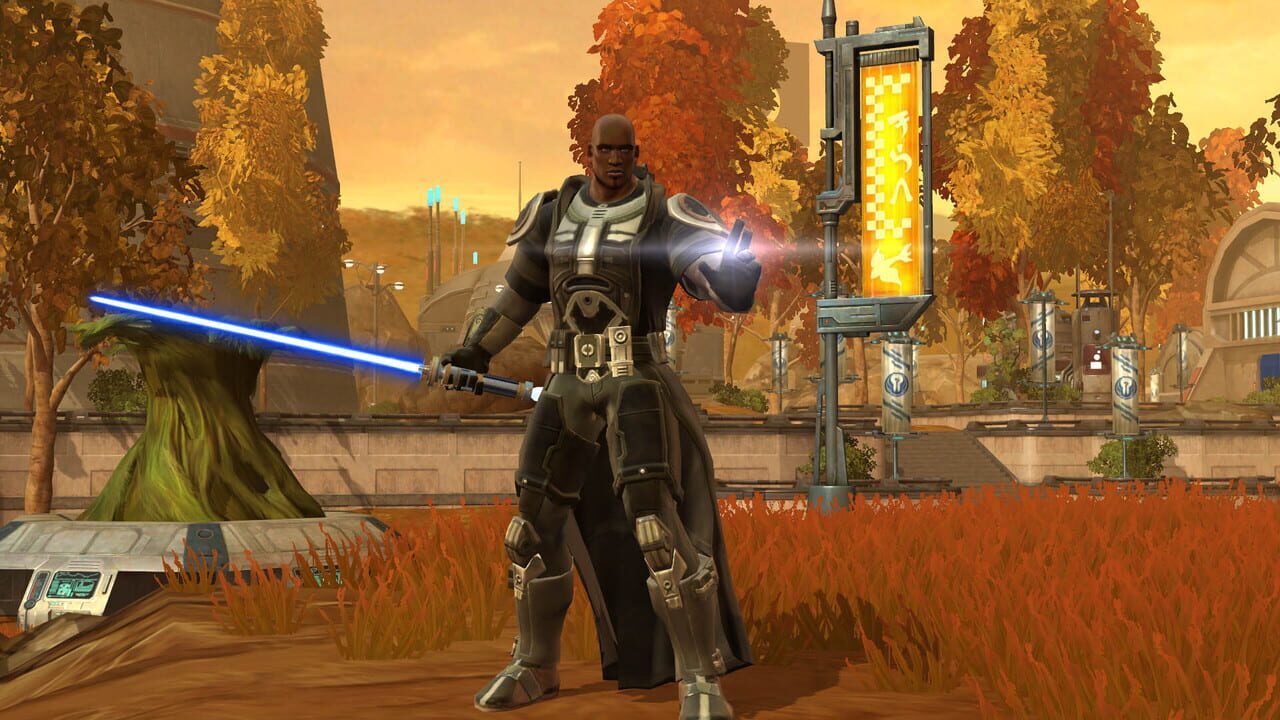 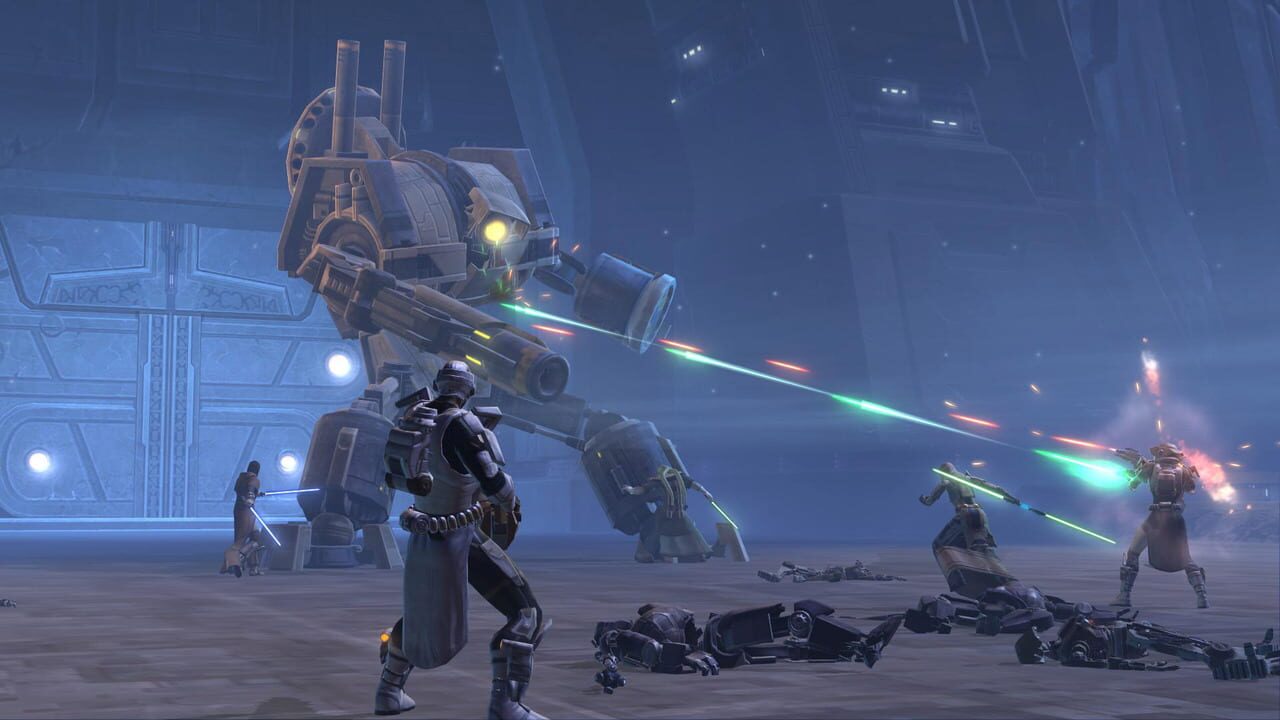 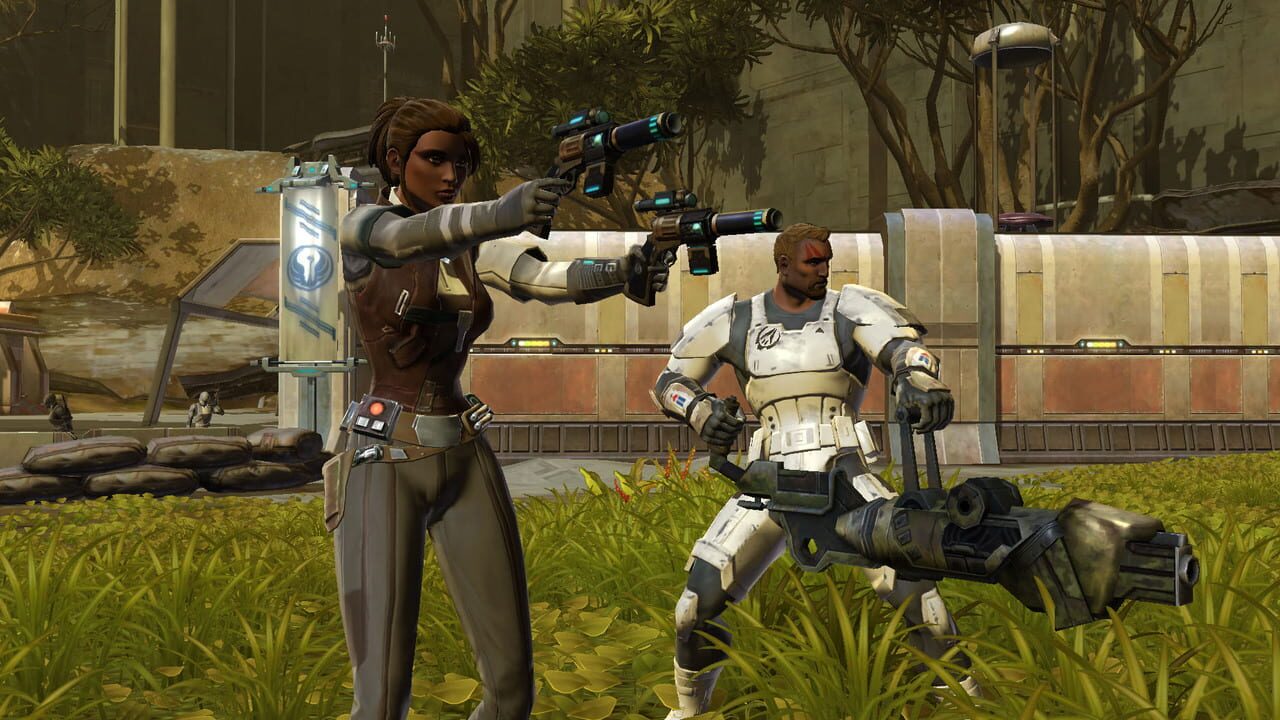 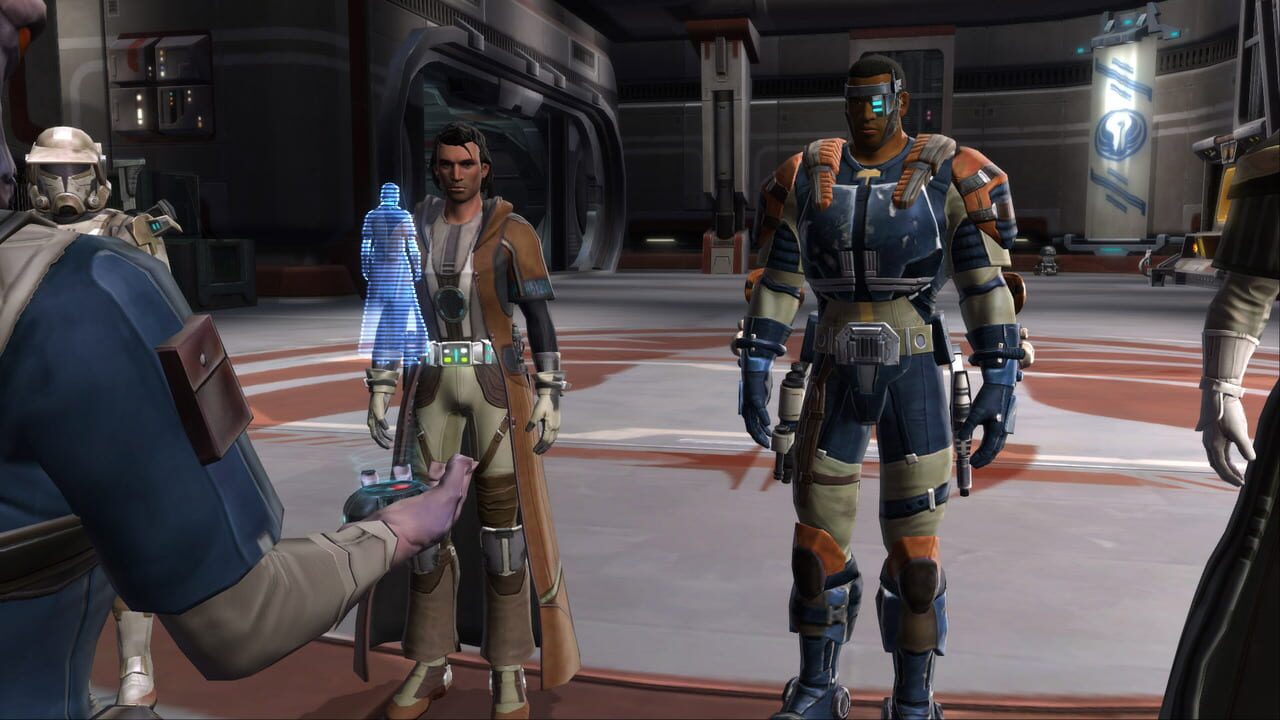 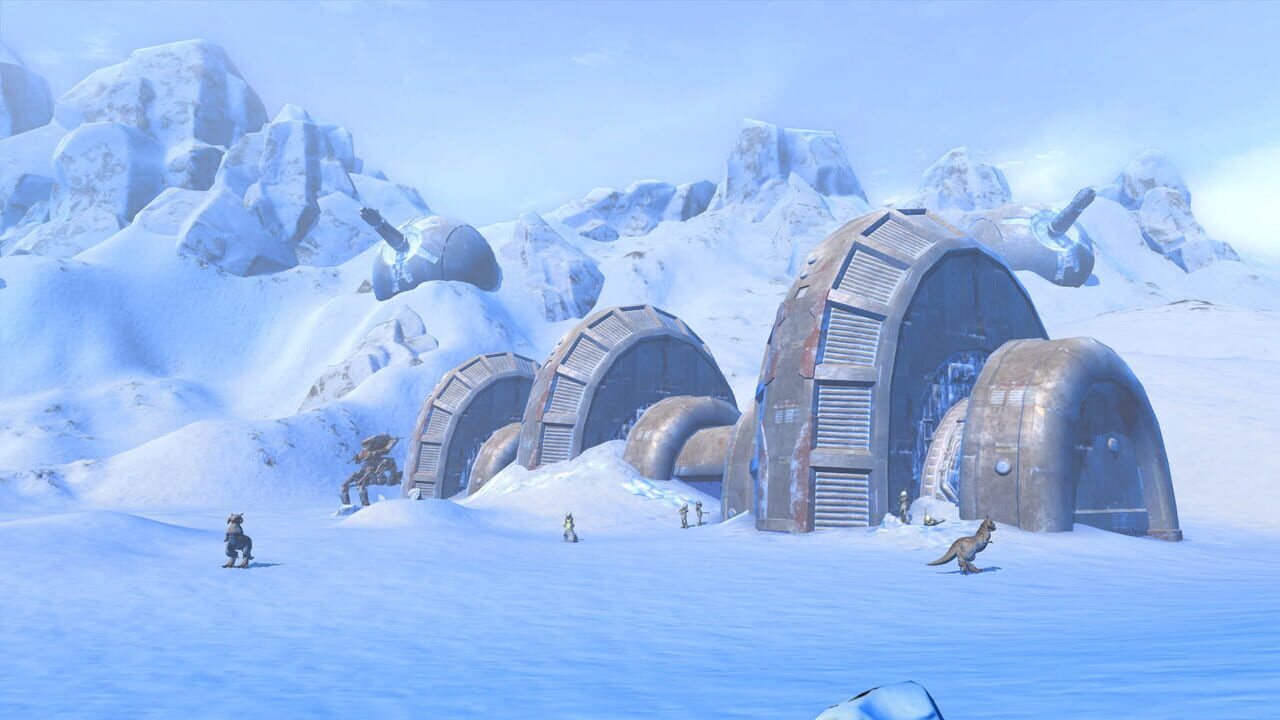 If screenshots are not enough, you can enjoy creative videos from LucasArts

But that's not all! We also carefully prepared the best strips from Star Wars: The Old Republic.

If you like Star Wars: The Old Republic, but you're tired of it and want something new, you can try other games.