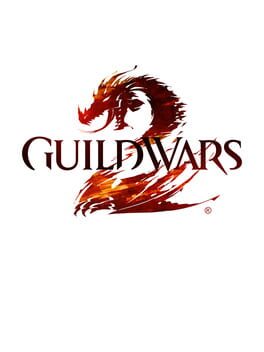 Guild Wars 2 is the sequel to the Guild Wars series of games by ArenaNet. Guild Wars 2 was released on August 28, 2012. It has been in development since 2006. Many features have integrated into the game which align it with traditional MMORPGs, such as a persistent world and a level cap of 80, but the game has been described by ArenaNet as having non-traditional elements as well, because "it doesn’t make you spend hours preparing to have fun rather than just having fun."

In addition to Guild Wars 2, the representatives of Role-playing (RPG) games also belong:

Guild Wars 2 is versatile and does not stand still, but it is never too late to start playing. The game, like many Role-playing (RPG) games has a full immersion in gaming. AllGame staff continues to play it.

Guild Wars 2 is perfect for playing alone or with friends.

At AllGame you can find reviews on Guild Wars 2, gameplay videos, screenshots of the game and other Role-playing (RPG) representatives.

Your story begins the moment you bring your character to life. When you create your character, you’ll choose from a range of biographical options that reflect their personality, history, and how they see the world. This biography will set you down a story path, which offers you choices to make. Your decisions will take the story in different directions. The race you choose for your character determines which of the five massive home cities they’ll begin their story in. Your personal story will guide you through private, instanced chapters that explore your character’s life and adventures as they shape their own destiny. If you need a little help, you can always invite friends along to experience your personal story with you. As “guest stars,” these players can help you, but it’s still your story, and key decisions are yours to make Guild Wars 2 provides players both the social, fully interactive feeling of a multiplayer game as well as the customized, choice-based story of a role-playing game. Whether the stakes are epic or personal, we want players to experience their own story within Tyria. We’ve brought to life a massive world of events, storylines, and characters—all we need is you.

Author: Gustavo Maeso
Date: 2020-07-30 21:43:45
NCsoft brings us the most exciting sequel to the MMORPG genre, Guild Wars 2 set 250 years after what happened in Guild Wars, in which the wars of yesteryear are no longer comparable to the great power that hangs over all races. Sluggish for thousands of years and older than the six gods, the dragons have awakened and will destroy all of their inhabitants until they gain full control of Tyria.

With a total of 5 races : Asura, Sylvari, Humans, Norn and Charr. Each of them contains a complete story behind their backs with initiation missions very different from each other since depending on the race you decide to take the role, you will start in a region of the map different from the others with their own plot. In addition to this you have 8 professions available: Mesmer, Guardian, Necromancer, Ranger, Elementalist, Warrior, Thief and Engineer. Each one is very different from the other since depending on how you like to play you will have some options or others. The engineer for example, can use a great variation of gadgets, being able to use pistols to attack from a distance and fill your enemies with lead, Equip yourself with a flamethrower to fry them like on the barbecue in your town or fill the battlefield with dynamite by blowing up the unwary.

After choosing the race and profession according to the style of play that best suits your tastes, the character editor follows the same line as its predecessor without offering great options to having a character that visually stands out from the rest physically, in this sense it does not It adds nothing new, but where it really gives it a more role-playing touch is when we reach the step where we must define our past and choose what our way of making decisions will be from the moment we step on Tyria, this will give us a touch of extra personality that will determine if our objective is expendable or not.

Going into the role of our character and ready to fulfill our role in the story, we are presented with a leveling that none of us are used to. Avoiding the typical give me quest, I do it and go back for my reward and get ready if you do not give me, Guild Wars 2 gives us a multitude of options for us to go up levels as we decide within the possibilities that it presents us. We have a main story for our character that we can start or postpone for when we want to know well the mysterious plot that surrounds our character, or we can travel through the towns talking to their inhabitants and offering our help for their farms to prosper watering turnips and carrots or expelling the invaders from their estates, each one decides how to end this type of events that we must carry out until completing a little heart that demonstrates the process we have in it, once finished we do not need to visit the lucky one again. We have made your day brighter, as we will receive our experience instantly and an email with our money, but if we want to see this person again, when speaking with them they will be so grateful that they will provide us with an additional reward in exchange for a few coins. Here the MvM pvp is also used to level up each time you complete one of the global objectives such as conquering a fortress or repelling assailants who come from other servers to take away what is yours.

The abilities would vary in one way or another, differentiating ourselves from the others depending on the weapon we are using in our character, granting us advantages or disadvantages depending on the situation we find ourselves in. We can command abilities that inflict a lot of damage, improve our survivability, or protect our allies by healing them and eliminating negative status effects. Our character will be able to carry 2-handed weapons, a weapon and a shield or a weapon in each hand, this will grant us a series of abilities in our action bar that is divided into two parts: the left action bar with 5 skill slots , the first 3 holes will be used for the weapon that we carry in the main hand and 2 for the secondary one and the 5 if we use 2-handed weapons and the right action bar that will give us 5 other abilities, the first for a healing ability , 3 for support skills and the last one for an elite skill.

All these innovative alternatives that we have to level up and attack with our character is one of the successes that make this title grow in popularity since you can combine each of the options that they offer you to level up or focus only on one adapting to the tastes of each player, which makes more and more people decide to play it.

Screenshots will help you evaluate the graphics and gameplay of Guild Wars 2. 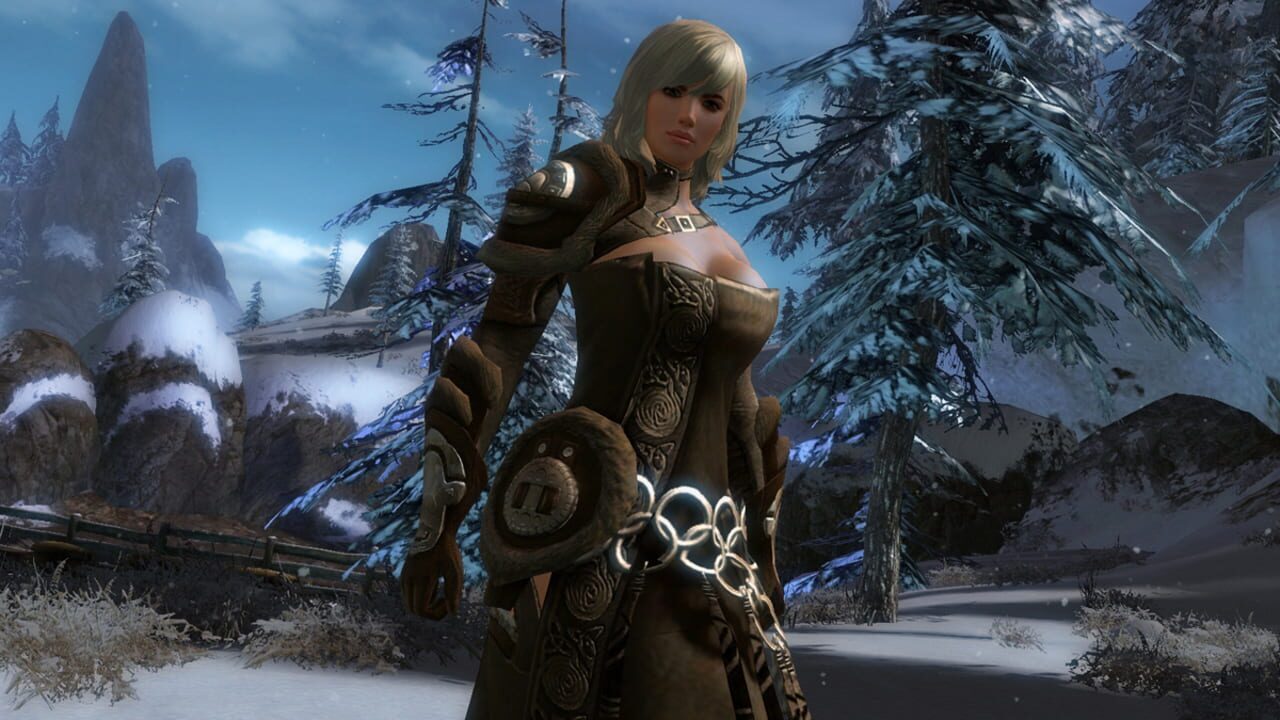 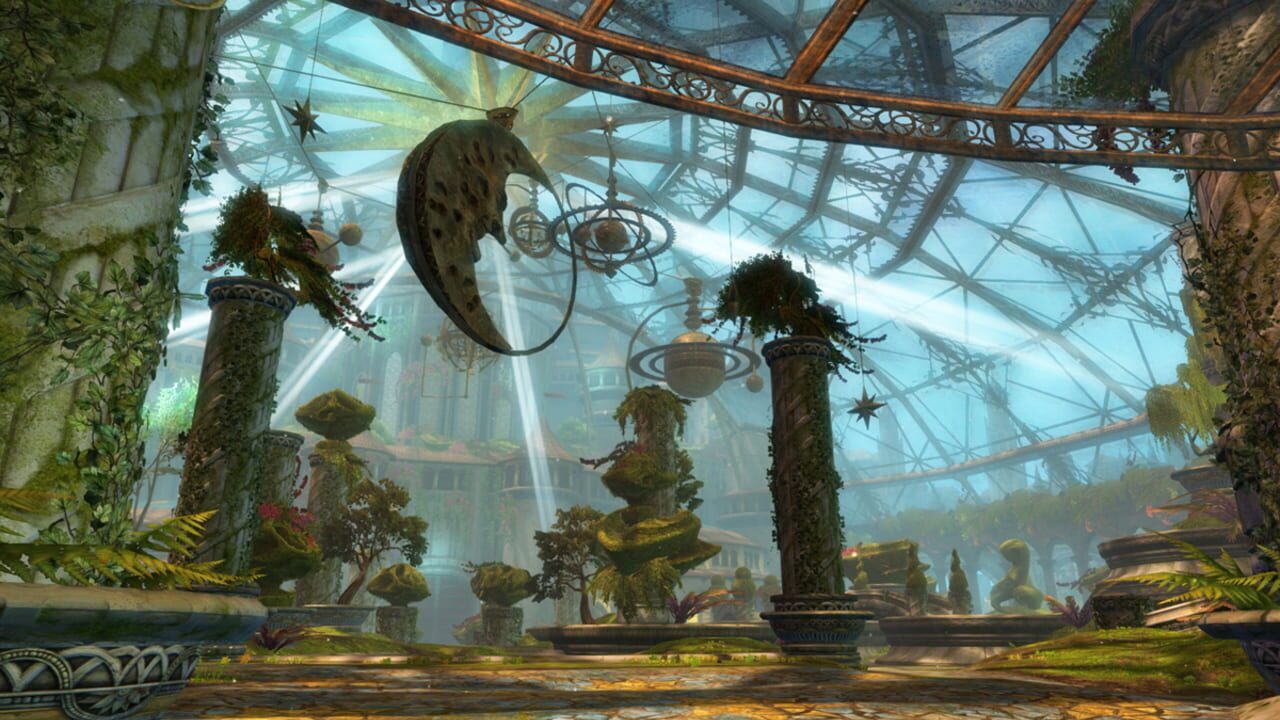 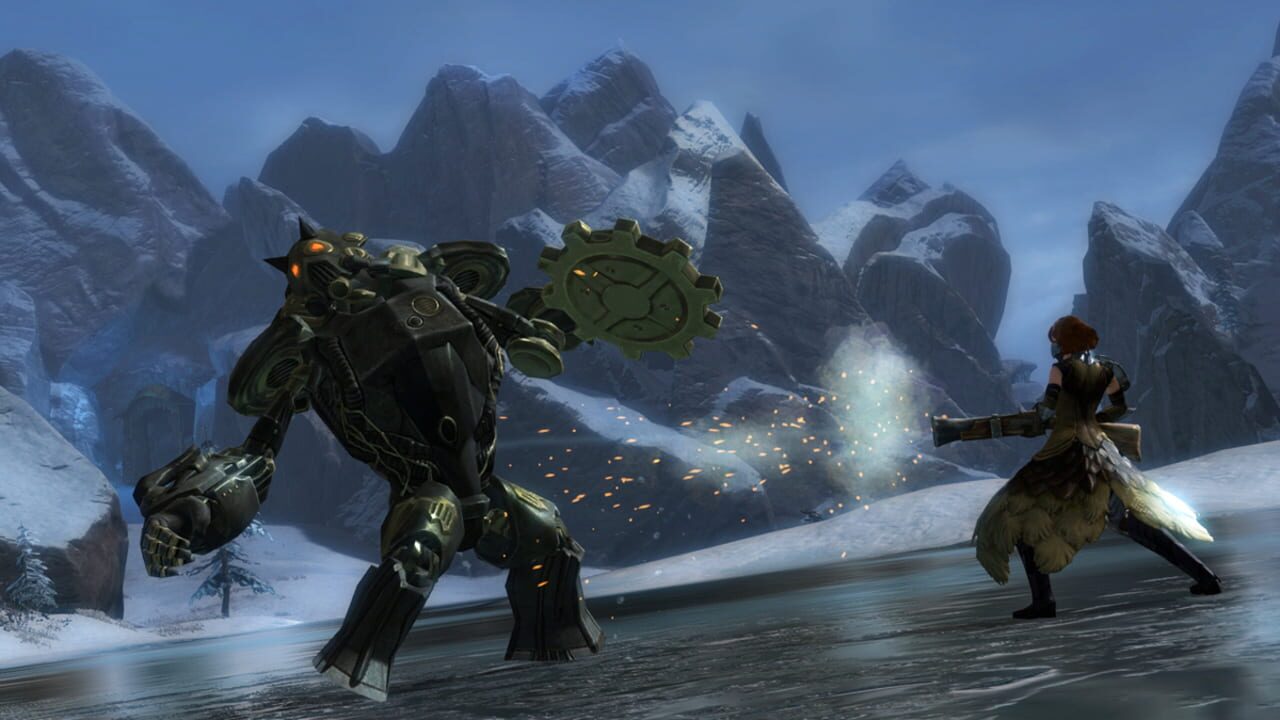 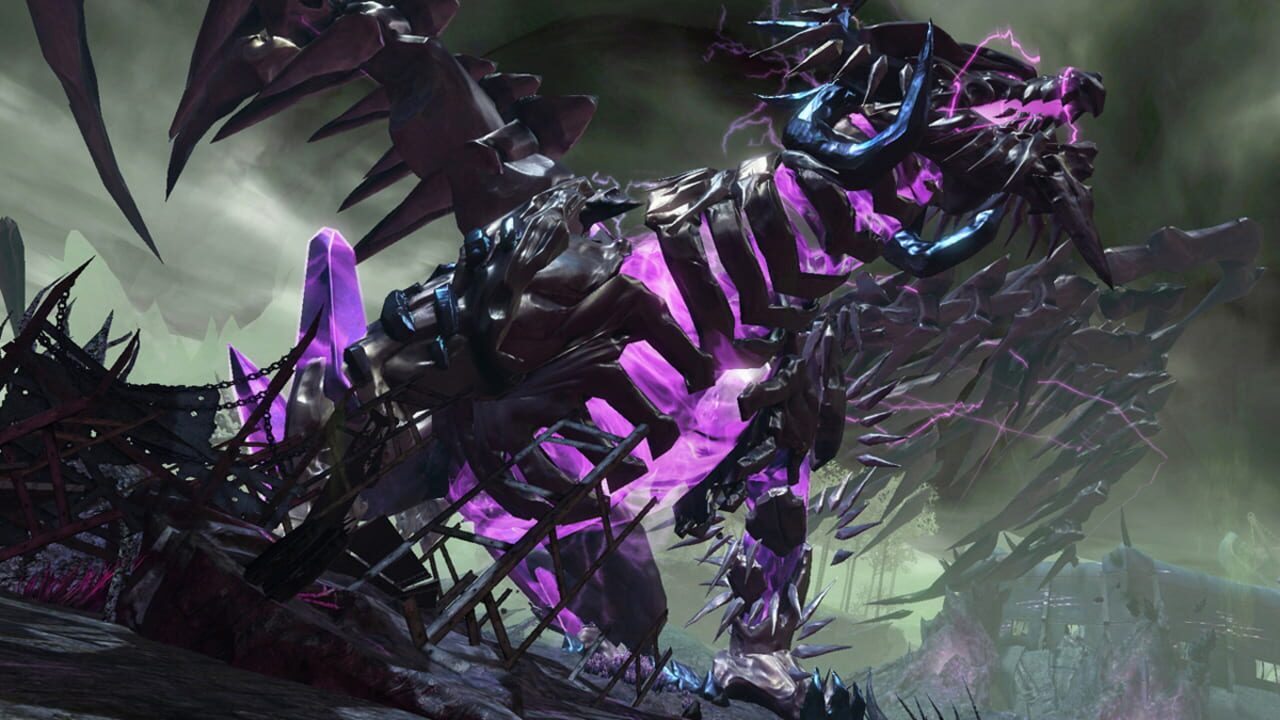 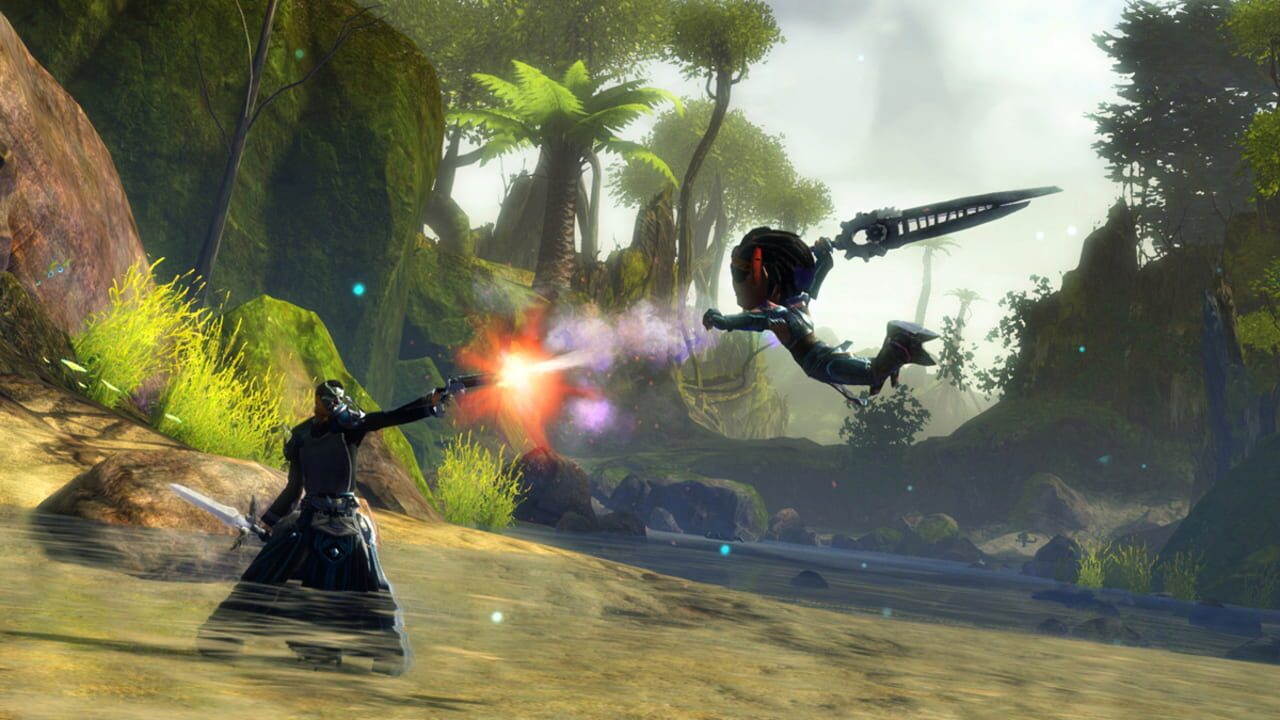 But that's not all! We also carefully prepared the best strips from Guild Wars 2.

If you like Guild Wars 2, but you're tired of it and want something new, you can try other games.